The previous section made reference to the pixel-based model of CTE losses. The WFC3/UVIS model is based on the empirical model for ACS/WFC that was constructed by Anderson & Bedin (2010), which itself was inspired by the model in Massey et al. (2010).

The basic readout model assumes that each column of pixels contains a number of charge traps distributed evenly among its pixels from j=1 to j=2051. Charge packets for pixels at the top of the chip (far from the serial register) will see all of the traps in the column.  Those in the middle at j~1024 will see half of the traps, and those at j~200 will experience a tenth of them.  According to the model, each trap will grab and hold a particular electron in a charge packet (the first, the second, the hundredth, the ten-thousand-third, etc.).

The model also has a release profile for each trap.  With most traps there is a 20% chance the electron will be released into the first upstream pixel, a 10% chance it will be released into the second upstream pixel, etc.  We find for WFC3/UVIS that essentially all trapped electrons are released after 60 transfers.  The traps that grab the first few electrons in a pixel appear to have a much steeper release profile wherein all the charge is released after only 6 transfers (see Figure 5 in WFC3/ISR 2021-09).

The model simulates the readout process by going up through each column, pixel by pixel, from j=1 (close to the serial register) to j=2051 (at the top of the detector) and determining (1) which electrons will be trapped during the journey down the detector and (2) when these trapped electrons will be released.  Even though this is actually a stochastic process, the model must treat it deterministically. The end result of the readout process is that the observed distribution of pixel values gets blurred somewhat in the upstream direction relative to the original distribution, leading to the characteristic CTE trails seen behind sources in CTE-affected UVIS images.

In order to determine optimal parameters for the pixel-based model, we examined the blurring experienced by hot/warm pixels (WP) in a variety of dark exposures taken in December 2020 with both short (30s) and long (900s) exposure times, and with various post-flash background levels (from zero up to 100 electrons).  This strategy enabled us to scale down the WP intensity from the long exposures (where they did not suffer much loss), to estimate the true intensity of the WPs in the short exposures where their fractional losses will be greater and more dependent on the background.  This enabled us to examine directly the losses as a function of background.

Figure 6.2  below shows the losses of a WP that started with 75 electrons as a function of the parallel shifts it experiences.  The different panels correspond to different post-flash background levels.  It is clear that losses are more than 50% for any background below about 19 electrons for a source transferred down the entire detector.

Figure 6.2:  The observed number of electrons that survive to readout for a 75 electron pixel as a function of the number of parallel shifts to the amplifier.  Each panel shows a different background.  Taken from Figure 3 of WFC3/ISR 2021-09. 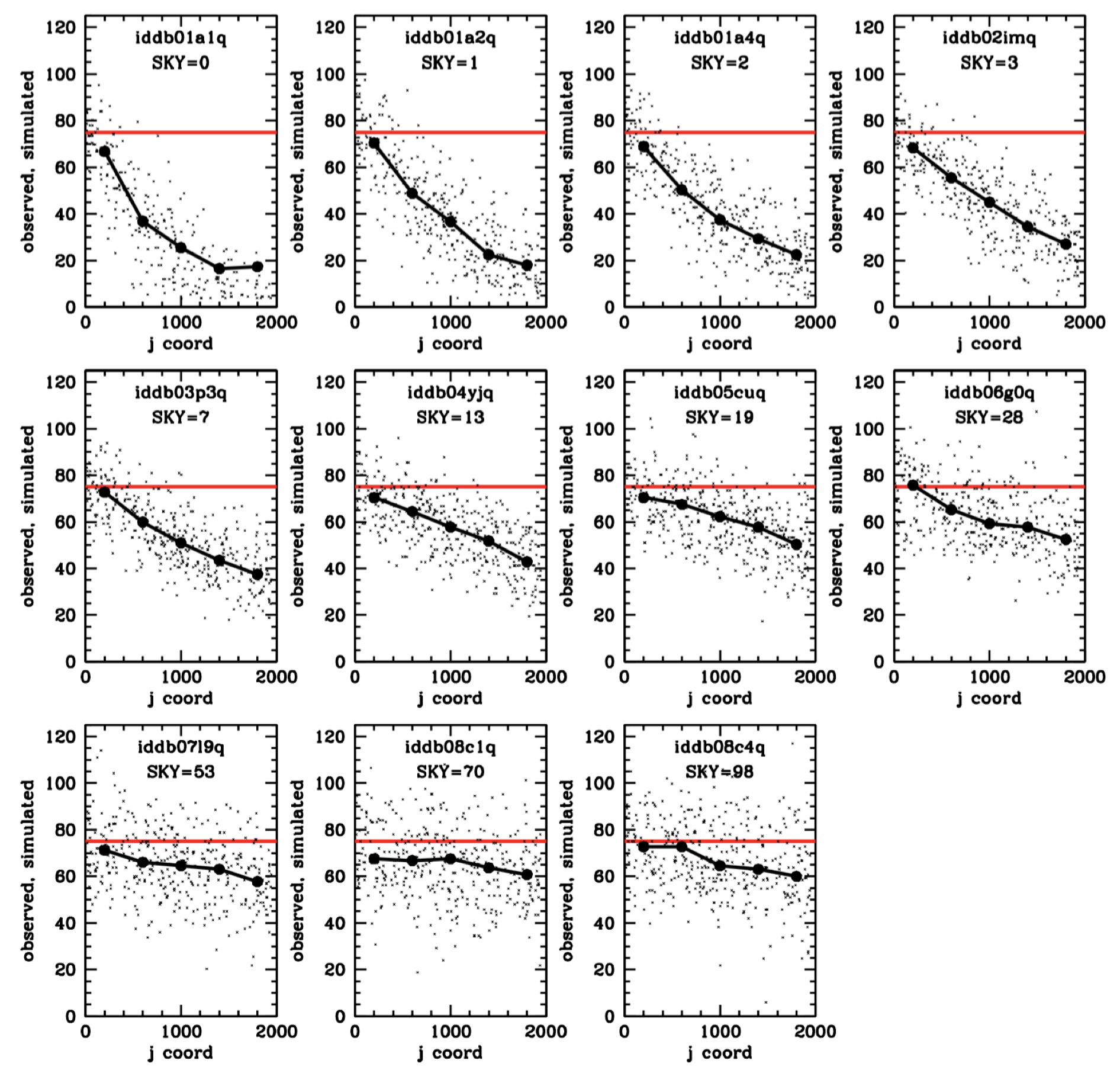 The curves in Figure 6.1 can be used in a forward model to simulate how an initial pixel distribution would be blurred by the readout process.  In order to use the model on science images, we must invert this procedure: we must determine what original image – when pushed through the readout algorithm – generates the observed distribution. This is formally a non-linear deconvolution process.

There are several challenges to a pixel-based reconstruction.  One challenge is that the observed images represent not just the charge that arrived at the readout, but they represent this charge plus a contribution from the readnoise (3.1-3.2 electrons for UVIS) along with any noise associated with the charge-trapping and -releasing, which is a random process.  The other challenge is that the model assumes an even distribution of traps throughout the detector, even though in actuality this distribution is stochastic: each column will naturally have a slightly different number of traps and even the distribution of traps within each column will surely not be perfectly uniform.

The readnoise introduces a serious complication.  An empty image will be read out to have a variance of about 3.2 electrons in each pixel due to readnoise. If the original image on the detector had a pixel-to-pixel variation of 3.2 electrons on a low background, then the charge-transfer process would blur the image out so much that the image that reached the amplifier would have a variance of less than 0.5 electron (see Figure 12 in WFC3/ISR 2021-09). The CTE reconstruction algorithm determines what the original image would have to be in order to be read out as the observed image.  If we include readnoise in this observed target image, then the original image would have to start with an extremely large amount of pixel-to-pixel variation (perhaps a sigma of 15 electrons) for it to end up with 3.2 electrons of pixel-to-pixel variation after the blurring readout process.  In other words, we would have to add a factor of five more noise to arrive at the image that was read out.  This clearly will not produce a useful reconstruction, so we must find some way to mitigate this "readnoise amplification".

We address the issue by taking the observed image (which has readnoise in it) and determining the smoothest possible image that is consistent with the image, modulo readnoise and noise from the charge-transfer process.  We choose the smoothest possible image, since the smoother the image, the less the readout algorithm will end up redistributing charge. While this may not give us the true counts that arrived at the readout register, it should provide us with the most conservative possible CTE correction. The pixel-based reconstruction algorithm then operates on this "smooth" image, and the redistribution of flux is applied to the observed image (which still has the readnoise in it).

Figure 6.3 shows an example of a star field with considerable CTE losses.  The left panel shows the uncorrected image, which The images below show the uncorrected _flt image on the left and the pipeline-corrected _flc image on the right for exposure iehr02lkq, a 4-s exposure taken with CAL-16441 at the center of globular cluster Omega Centauri.  The portion of the image shown is near the top of the chip, where CTE losses are greatest.  The image background here is 15 electrons (5 electrons natural and 10 electrons post-flash).  The CTE trails are obvious in the image on the left.  The pixel-based algorithm does a good job removing the trails and restoring flux into the sources.  The few instances of over-subtracted trails come from cosmic rays that landed during readout and therefore did not undergo 2000 parallel transfers.

Figure 6.3:  A 200×250-pixel portion of exposure iehr02lkq, a 4-second exposure taken by program CAL-16441 of the center of globular cluster Omega Centauri.  The scene shown is near the top of UVIS2, about 2000 parallel shifts from the readout amplifier.  The panel on the left shows the uncorrected _flt image.  The panel on the right shows the _flc image, which has has the pixel-based correction performed in the pipeline. 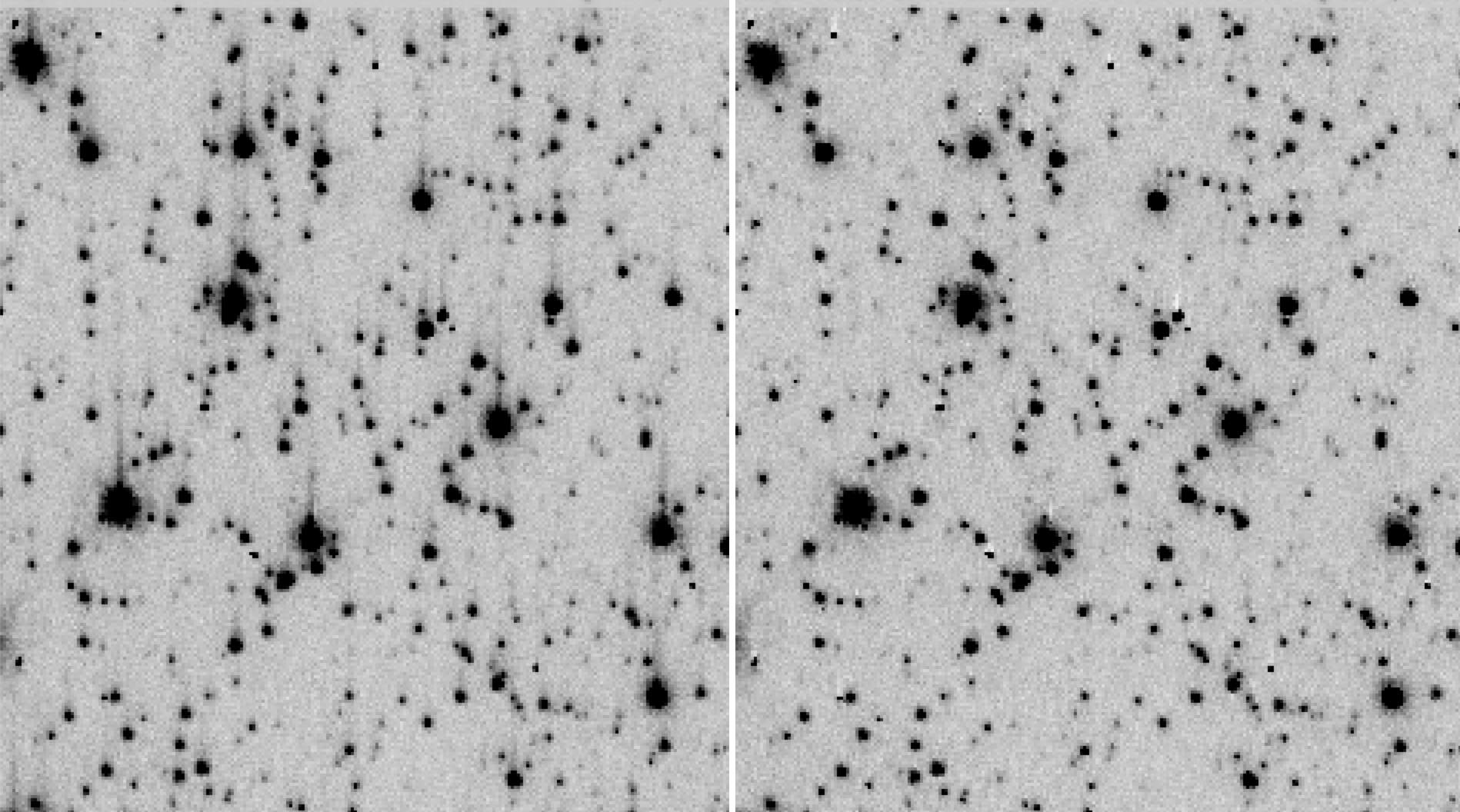 Before 2016, the pixel-based CTE correction was a standalone FORTRAN program available for download. Since then, however, the pixel-based CTE correction is part of the automated calibration pipeline for all UVIS full-frame images (calwf3 version 3.3 and later) and most1 UVIS subarray images (calwf3 version 3.4 and later). Controlled via a header calibration switch (PCTECORR), and associated calibration table (PCTETAB) and CTE-corrected reference files (e.g. DRKCFILE), calwf3 will by default produce two sets of products: the standard non-CTE-corrected files (e.g.  *_flt.fits and *_drz.fits) as well as the new CTE-corrected results (*_flc.fits, *_drc.fits). Observers can use the *_flc.fits and *_drc.fits data products in the same way as *_flt.fits and *_drz.fits files.

In general, the pixel-based correction is good to about 25%.  However, in low-signal/low-background situations where the losses can become greater than 25%, it can be hard to trust any reconstruction procedure.  This is because the reconstruction procedure uses the surviving charge distribution as a "scaffold" upon which the lost charge is reconstructed.  When the surviving charge no longer resembles the original charge distribution, reconstruction becomes impossible.  Until 2015, backgrounds of 12 electrons or greater had losses less than 25%, but now in 2021, losses are greater than 40% for any backgrounds less than 20 electrons.  And the background has to be greater than 30 electrons to get the losses below 25%, where the pixel-based correction works best.

As mentioned above, when the background is low and losses are large, then two undesired things happen:  the algorithm cannot reconstruct the scene and it amplifies noise.  To avoid this, the pipeline algorithm is designed to suppress this noise amplification, with the consequence that little reconstruction is attempted for sources near the background.  Section 5 of WFC3/ISR 2021-09 provides more details on this issue.  Given the limitations of reconstruction at low signal and background levels, we have made available some empirical corrections that do not suffer from noise amplification.  Additional ways to correct observations will be provided in the near future, with the latest information always available on the WFC3 CTE webpage.

The WFC3 CTE web page is at: http://www.stsci.edu/hst/instrumentation/wfc3/performance/cte

1For observers utilizing unsupported subarrays (UVIS2-M1K1C-SUB and UVIS2-M512C-SUB), there is a workaround available that uses the standalone FORTRAN CTE-correction code (STAN Issue 18)